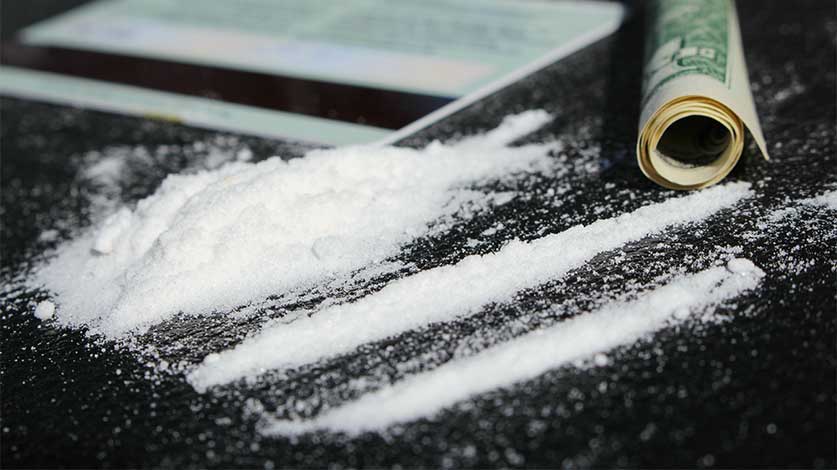 Cocaine is the white power made from the coca plant and is classified as a central nervous system stimulant drug and a schedule II controlled substance by the DEA and FDA. This means it has a high potential for abuse and can lead to very serious health issues.

Because of the high potential for abuse, cocaine can be very addictive and lead to substance use disorder. When abused, the drug can also lead to adverse side effects. Luckily, there are ways to treat cocaine addiction.

Cocaine can be abused in a number of ways. As it’s not considered a safe drug you’d get from a healthcare provider, any use of it is considered drug abuse. It can be snorted, injected, plugged, rubbed on the gums, smoked, or swallowed.

How you use the drug changes the potency and how long the effects last. If smoked, the effects can be intense but short-lived. Snorting or injecting cocaine can be even more intense but lasts an even shorter period of time.

In order to maintain the effects, people may take more and more, increasing the risk of both addiction and overdose.

Frequently abusing cocaine can also cause a strain on the heart and could ultimately lead to death via a stroke or heart attack.

Some of the effects of cocaine abuse are more intense and harmful than other effects. The most common effects include:

There are also several signs you can look out for if you think a loved one may be addicted to cocaine. The signs of cocaine addiction can include:

Despite the many issues that come with a cocaine addiction, several cocaine addiction treatment options are available. The rehab program you choose depends on the severity of your substance abuse and your overall behavioral health needs.

Detox is usually the first step toward recovery. During this process, you stop any cocaine use and are medically supervised while the drug leaves your system.

If your body has built up a cocaine dependence, you’ll likely go through cocaine withdrawal and start to feel some withdrawal symptoms as you come off the drug. The detox process is short-term and can last around seven to ten days.

Outpatient care is also an effective treatment option. Instead of staying at a treatment center 24/7, you’re able to go home after receiving treatment each day. Outpatient provides many of the same options as inpatient care, like group therapy and support groups.

Once formal treatment ends, aftercare can be the next step you take. Aftercare reinforces what you learned in treatment and addresses issues like relapse, depression, and the struggles that come as you continue your recovery.

If you or a loved one struggles with cocaine addiction or other forms of drug use, you don’t have to deal with it alone. Ohio Recovery Center offers a variety of inpatient substance abuse treatment options including medical detox, medication-assisted treatment, and more.

How Long Does Cocaine Stay In Your System?

Cocaine can stay in your system for several hours after the last use. Common cocaine drug testing methods can detect cocaine use for an average of about 2 days later.

Learn more about How Long Cocaine Stays In Your System

How Much Does Cocaine Cost In Ohio?

The cost of cocaine can differ quite a bit depending on where you’re buying it and how pure it is. But, on average, it’s typically about $60-$200 per gram in Ohio.

Learn more about How Much Cocaine Costs In Ohio

When someone is high on cocaine, they may experience feelings of euphoria, happiness, and excitement. In addition to this, they may also feel extra confident and energetic.

Learn more about What Does A Cocaine High Feel Like?

Cocaine generally looks like a fine white powder, but can also be off-white, beige, or pinkish in color.

Cocaine does not likely have an identifying odor. However, the smell of cocaine is often described as artificial or chemical like, and the odor may resemble gas or paint.

How Can You Identify Fake Cocaine?

Fake cocaine, or bath salts/synthetic cathinones, come as white or colorful crystals or dust that can sometimes resemble cocaine. However, bath salts do not act as a local anesthetic and have other physical or chemical differences that sets them apart from authentic cocaine.

What Is Cocaine Cut With?

Cocaine can be cut with levamisole, benzocaine, opioids, and common household products. These cutting agents can cause a wide range of side effects including blood clots, anxiety, bacterial infections, and cardiovascular failure.

What Is Pink Cocaine?

Pink cocaine is an emerging South American party drug that features the psychedelic drug 2C-B. However, this bright pink powder more often replaces 2C-B with a combination of other euphoric and addictive substances, creating an illicit and unpredictable powder cocktail.

How Does Cocaine Use Affect Bodybuilding?

The illicit drug cocaine may affect bodybuilding by reducing your overall mood and motivation, interfering with sleep and healing, lowering your energy level, directly interfering with muscle function and health, and damaging your long-term cardiovascular health and overall well-being.\