Freebase cocaine is the smokeable, solid form of cocaine. When “freebasing,” a person experiences the effects of cocaine more quickly, which can lead to multiple health concerns. 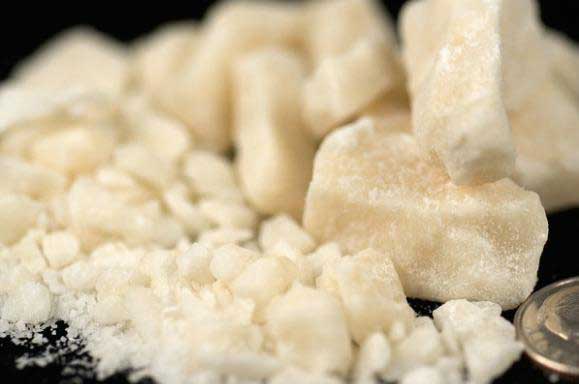 Freebase cocaine is the solid form of the drug and a strong stimulant. “Freebasing” is the term used when a person smokes cocaine, a type of cocaine abuse.

Cocaine is a Schedule II controlled substance according to the United States Drug Enforcement Administration (DEA), meaning it has a high potential for abuse. Freebase cocaine use causes a number of side effects.

What Is Freebase Cocaine?

Sometimes known as crack cocaine, freebase cocaine contains the cocaine base without the cocaine hydrochloride. In order to achieve the solid state, the hydrochloride must be removed by using an alkaloid such as baking soda.

Instead of powder cocaine, freebase cocaine in its solid form has a low melting point, making it easier to be smoked. “Smoking crack” may sometimes refer to smoking freebase cocaine.

Freebase cocaine is melted, causing the solid form to evaporate, leaving vapors for those to inhale with a glass pipe. This type of drug use can lead to a number of serious side effects.

When smoked, the freebase solid form of cocaine creates a number of serious health concerns. The effects of cocaine abuse vary in a number of ways. Those inhaling the stimulant have a risk of developing adverse side effects.

Using freebase cocaine can result in a number of short-term effects including:

There are a number of long-term effects caused by cocaine abuse. According to the National Institute on Drug Abuse (NIDA), some of these consist of:

When freebasing cocaine, abruptly stopping the drug may lead to serious cocaine withdrawal. When this occurs, you can develop a number of withdrawal symptoms.

Withdrawal symptoms associated with cocaine use may consist of:

Confide in your healthcare provider so they can help assist you in finding treatment facilities in Ohio to help you safely discontinue your substance use.

Risks Of Freebase Cocaine Use

There are a number of health risks to consider before using freebase cocaine.

Those who smoke cocaine may have a higher risk of developing lung infections such as pneumonia due to the stress placed on your respiratory system.

If used for long periods of time, the harsh smoke damage to your lungs can lead to breathing difficulties and potentially life-threatening respiratory depression.

According to the Substance Abuse and Mental Health Services Administration (SAMHSA), abusing cocaine in this manner can result in developing asthma as well.

Abusing freebase cocaine is a risky endeavor due to the fact that the drug you take can be laced with other illicit drugs which affect the central nervous system (CNS). For example, those smoking cocaine may not realize it has traces of fentanyl or other opioids.

Smoking an illicit drug can prove to be hazardous as other substances may have contaminated the drug, causing more toxins to enter your body and potentially leading to an overdose.

The risk of overdose may be higher for those who smoke cocaine. Freebasing can more easily lead to a cocaine overdose due to how quickly the substance enters your system.

Some of the side effects of a cocaine overdose may include:

If you or a loved one are struggling with drug addiction, consider Ohio Recovery Center.