Heroin is a Schedule I controlled substance, meaning that it is a dangerous and addictive drug that is not considered to have a valid medical use in the United States. 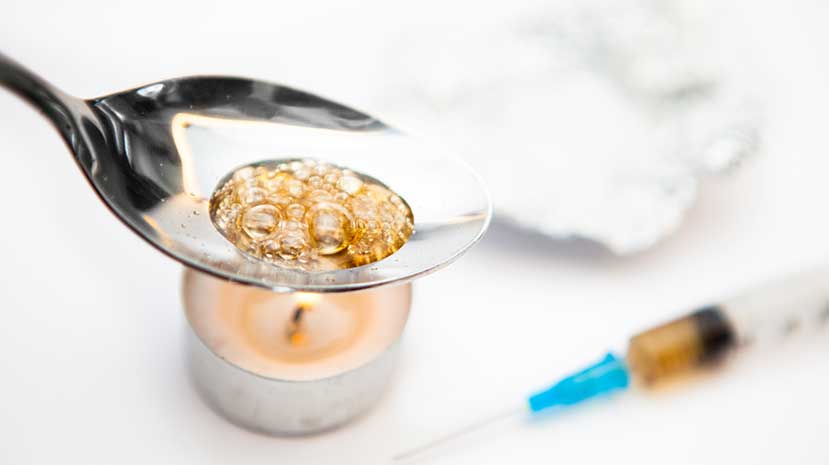 Heroin is a powerful, illicit opiate narcotic produced from opium poppy plants. It is twice as potent as its originator drug, morphine, and may resemble a fine white powder or a sticky black tar.

In recent years, heroin has contributed heavily to the American opioid epidemic, though it is being increasingly overtaken by the far more potent synthetic opioid drug fentanyl.

Diamorphine was first synthesized in 1874 by a chemist in London, and again in 1897 by another chemist working for Bayer pharmaceutical company in Germany.

Dubbed heroin, a name taken from the German word heroisch (equivalent to the English term heroic) the new painkiller was internationally exported and proved especially popular in the United States.

It was then outlawed in the US in 1924 due to its high potential for drug addiction, overdose, and other chronic health problems.

Heroin is now classified as a Schedule I controlled substance, meaning that it is a dangerous and addictive drug that is not considered to have a valid medical use in the United States.

Using, possessing, selling, or transporting heroin is considered a felony, and anyone who is convicted of supplying the heroin that leads to an overdose faces especially severe penalties.

Most heroin is produced from opium poppies and morphine in Afghanistan, with smaller amounts produced in Southeast Asia, Mexico, and Columbia. It is then smuggled across international borders, diluted with filler compounds, and sold on the black market.

Heroin can be used in a variety of ways, including:

Some try heroin after becoming addicted to prescription drugs first. Others are exposed to heroin in their environment, sometimes trying heroin mixed with cocaine or methamphetamine to form an often-lethal drug cocktail known as a speedball.

When used, heroin rapidly binds to opioid receptors in the brain and elsewhere in the body, triggering an intense and euphoric release of dopamine, far beyond what a person can experience normally.

This intensity of pleasure triggers the brain’s reward system and changes how it works, setting up a compulsive desire to seek out heroin in the future and to feel that pleasure again and again.

Unpredictable street drugs like heroin are responsible for tens of thousands of overdose deaths each year, and addiction only increases a person’s risk of dying or suffering other severe harms.

Heroin and other opioids can cause death by slowing or stopping a person’s bodily functions, especially their breathing.

Key signs of a heroin/opioid overdose may include:

If you suspect a heroin overdose has occurred, immediately administer the opioid antidote drug naloxone (Narcan) if available, call your local emergency medical services, and administer first aid and CPR until they arrive.

Abusing heroin can cause a wide range of predictable changes to a loved one’s behavior, personal priorities, and mental health. Common signs of heroin addiction include:

Substance use disorders are not easy to overcome alone. Fortunately, a variety of treatment options have been developed to help those struggling with heroin use and addiction.

Inpatient treatment provides those in recovery with a safe, secure environment for recovery. Stays can last 30-60 days or more and involve extended in-depth behavioral health interventions.

Behavioral therapies, including cognitive-behavioral therapy (CBT) and motivational enhancement therapy (MET), focus on changing the way participants think and feel about their drug abuse and other choices, so they can make positive and lasting changes.

MAT programs use FDA-approved medications which have been shown to help those in recovery in different ways:

Addiction recovery is a lifelong process. Those who participate in rehabilitation should receive long-term support through case management, employment assistance, peer support groups, alumni groups, and other supportive programs.

If you would like to learn more about your options for heroin recovery treatment programs, including medical detox, inpatient care, and medication-assisted treatment, please contact Ohio Recovery Center today.

How Long Does Heroin Stay In Your System?

Detection of heroin use has long been a priority in different types of drug screenings, and stays in your system for up to 3 days after last use.

Learn more about How Long Heroin Stays In Your System

How Much Does Heroin Cost?

Heroin costs $5 to $20 per bag, which typically contains one-tenth to one-twentieth of a gram of heroin (several doses).

The street price of heroin can be affected by several factors, including:

What Is Heroin Cut With?

Highly pure heroin is extremely uncommon in the United States. Typically, the drug will be cut with a variety of different substances like sugars, quinine, cornstarch, powdered milk, fentanyl, local anesthetics, and others, which can increase the drug’s bulk or change its effects.

What Do The Different Types Of Heroin Look Like?

The different types of heroin can be white, black, or brown, and can come as a powder or as a stickier tar-like substance.

Although pure heroin is likely odorless, heroin can smell like the ingredients added to it, such as sugar, starch, or quinine. It may also smell vinegar-like, sweet, or acidic, and many identify the smell of heroin with burnt plastic.

How Does Plugging Heroin Work?

When plugged, heroin is usually dissolved or mixed into water and administered using a syringe without a needle. The drug is then rapidly absorbed into the bloodstream through the delicate membranes of the rectum.