Injecting heroin, also known as shooting heroin or skin popping, can cause effects such as euphoria, impairment, drowsiness, difficulty concentrating, itching, nausea, and feelings of warmth. 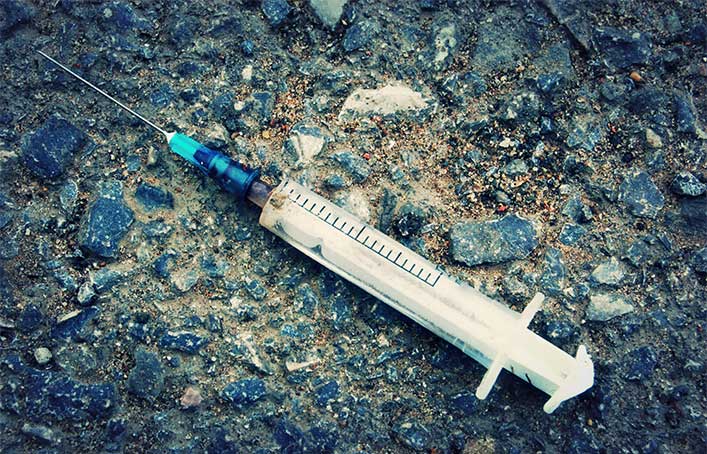 Common forms of heroin may include an off-white powder, or a dark, sticky substance known as black tar heroin. Both forms may be available in Ohio, and both can be injected to feel the drug’s effect quickly.

Heroin injection can cause serious health effects such as an increased risk for infectious diseases, life-threatening blood clots, and drug overdose. Data concerning drug use and overdose in Ohio suggests a rise in simultaneous heroin and fentanyl use, which can be fatal.

Shooting heroin can cause effects such as:

The onset of these effects may be shorter compared to snorting or smoking heroin, which can make heroin injection a preferred method of use.

Heroin is a Schedule I controlled substance in the United States. Its health risk is recognized by health organizations, and the drug has no approved uses. Shooting heroin can put your health at risk in both the short-term and the long-term.

A heroin overdose can occur when high doses of heroin enter the body in a short amount of time. Heroin injection may increase the risk of overdose because heroin can affect the body faster through injection compared to other forms of use.

A heroin overdose can cause respiratory depression, excessive drowsiness, a near-unconscious state, clammy skin, and gurgling noises in place of standard breathing.

Fentanyl may be a significant risk factor for opioid overdose due to its potency and prevalence on the illicit drug market.

Risks Specific To Injection Drug Use

Heroin can be adulterated, or cut, with other substances to increase the buyer‘s perceived volume of heroin. Common adulterants of heroin include starch, chalk, talcum powder, and flour. If these substances are injected directly into the bloodstream, they can cause life-threatening blood clots.

Sharing needles with others can lead to a high risk of HIV infection and other infectious diseases like hepatitis B. Injecting black tar heroin has been linked to wound botulism, a potentially fatal contamination of wounds.

Heroin can be highly habit-forming after repeated use. People who experience side effects of injecting heroin, such as skin infections, heroin overdose, breathing problems, and decreased mental health, may find it difficult to quit as usage increases.

If heroin use is overtaking your daily life, you may be suffering from a substance use disorder. Substance abuse treatment offers professional help through services such as counseling, monitoring heroin withdrawal symptoms via detox support, and improving your mental health.

To learn if our inpatient heroin addiction treatment center can accommodate the needs of you, your family member, or your loved one, please contact Ohio Recovery Center today.