Home › How To Quit Vaping

How To Quit Vaping: Benefits Of Quitting And Healthy Alternatives

E-cigarette use is considered to be healthier than smoking cigarettes. However, there are many known health risks associated with vaping, and many compounds in vape juice are unidentifiable. 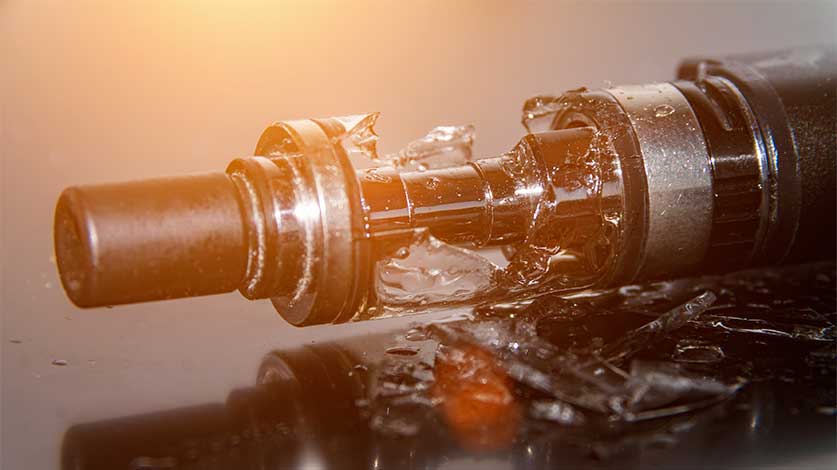 Vaping is considered to be a healthier alternative to smoking cigarettes, and many people use vaping as a way to quit smoking.

Young people, however, are more likely never to have smoked cigarettes when they begin using “smokeless cigarettes,” unaware of the health risks associated with them.

Regardless of your reason for using e-cigarettes, you may be looking to quit given these health risks, which include serious damage to major organs of the body.

This guide provides details on the benefits of quitting vaping and healthy alternatives and treatments that can help you quit.

Traditional cigarettes contain thousands of chemicals, including many that are toxic and known carcinogens.

Although e-cigarettes (e-cigs) contain fewer chemicals, many of the chemicals are unidentifiable, which is concerning, and others are known to be cancer-causing or lead to other health issues.

Vaping has been shown to cause damage to major organs of the body, including the brain, lungs, and heart.

When vape cartridges are modified, there are additional health risks to consider. Quitting vaping is the best way to protect yourself from these risks.

One of the most critical and immediate benefits of quitting vaping is improved lung function and a reduced risk for lung damage.

In addition to the health conditions below, vaping can also damage the lungs or cause lung disease through the formaldehyde and acrolein found in e-liquid or produced when the liquid is heated.

Using vapes can cause damage to the small airways of the lungs resulting in a condition called bronchiolitis obliterans (BO).

An ingredient used to mimic butter flavoring, diacetyl, was found to be the cause, and BO was nicknamed “popcorn lung.”

People who vape are at risk of developing this condition because diacetyl is a common flavor enhancer in vape juice.

Popcorn lung can involve permanent scarring of the smallest airways in the lungs, leading to difficulty breathing. There is currently no lasting treatment for the condition.

Another cause of inflammation in the lungs and lung damage through the use of e-cigarettes is the oily substances, or fatty acids, found in e-liquid.

Like bacteria and viruses that cause the type of pneumonia that most people are familiar with, these lipids can be drawn into the lungs and cause inflammation leading to pneumonia.

Symptoms of lipoid pneumonia include:

Like popcorn lung, there is no good treatment for lipoid pneumonia. However, quitting vaping is the best thing you can do to help your lungs heal on their own.

In recent years, Johns Hopkins Medical Center has begun treating a large number of young patients who vape and have experienced a collapsed lung.

A collapsed lung happens when there is a hole in the lungs. This can occur through blunt trauma, such as a stabbing, or when blisters on the top of the lungs burst.

Tall people who experience rapid growth spurts in their youth are more at risk of developing these blisters, which are harmless unless they rupture.

Smoking cigarettes or e-cigarettes makes it more likely that the blisters will pop. Although rest can help a collapsed lung heal, more serious cases require surgery.

Although some people feel relief from symptoms like anxiety when they vape, the effect could be a result of nicotine addiction.

Once an addiction to nicotine develops, withdrawal symptoms such as anxiety are alleviated when the person vapes or smokes again.

In addition to the psychological withdrawal symptoms associated with nicotine addiction, research shows that vaping may contribute to mental health issues in other ways.

In the study, vaping was shown to be related to an increase in:

A big benefit of quitting for people with certain substance use disorders is that it could help them prevent a relapse. Studies show that nicotine use is associated with cravings for opioids and stimulants.

Vaping is still a relatively new activity, and more research is needed in the area of its effects on mental health.

Not only is the nicotine found in vapes and cigarettes addictive, but it’s also toxic. As such, its use increases your blood pressure and heart rate, which can lead to a heart attack.

Many people who vape also smoke cigarettes — a combination that a recent study shows increases the risk of cardiovascular disease, including stroke, myocardial infarction, and coronary heart disease.

The study, involving almost half a million people, showed that those who smoke cigarettes and use vapes were significantly more likely even than smokers who never vaped to develop cardiovascular disease.

In addition to the respiratory, mental, and cardiovascular health benefits you receive when you quit vaping, another benefit to consider is knowing that you have better control of your overall health.

This is due in large part to the unknown components found in both traditional vapes as well as those that have been modified.

A chemical analysis of Juul, Blu, Vuse, and Mi-Salt brands of vapes in 2021 revealed almost 2,000 chemicals, most of which couldn’t be identified.

Three industrial chemicals, a pesticide, and flavorings associated with toxic effects were found. Caffeine was present in two of the four products but not listed as an ingredient.

Vape cartridges may be modified to include substances not usually found in vape juice, or they may be produced specifically to contain these substances.

There have been reports of fentanyl-laced vapes, including from the U.S. Drug Enforcement Administration (DEA) in 2020 warning the public about the danger following an overdose death linked to vaping.

While the primary concern related to fentanyl abuse is overdose involving the powdered form of the drug, the DEA has noted that ingesting fentanyl via vaping does pose a serious threat.

Confiscated vapes at high schools have also been found to contain THC, the chemical responsible for most of marijuana’s psychological effects, heroin, and other drugs, according to news reports.

Young people who smoke hydrocodone, smoke heroin, or smoke other opioids using vapes are at risk of experiencing brain and lung damage as well as other health risks, including addiction.

“Weed pens,” or vaporizers used to inhale THC, are becoming a popular way to ingest marijuana.

THC oil cartridges may contain vitamin E acetate, which studies show can interfere with lung function and lead to serious damage to the lungs when inhaled.

Many U.S. cities have banned vaping in the workplace, including restaurants and bars. There are other places and times when vaping isn’t possible.

People who smoke or vape are very likely familiar with the uncomfortable, sometimes anxiety-inducing feeling of not being able to take a puff.

This could be due to nicotine withdrawal, which involves symptoms such as:

It’s unknown if vapes contain other addictive substances, as many of the compounds found in vape juice aren’t identifiable. Caffeine is one known ingredient that may cause withdrawal symptoms.

How To Quit E-Cigarettes: Healthy Alternatives To Vaping

According to the Centers for Disease Control and Prevention, most people who smoke want to quit.

It isn’t clear if this includes people who vape, but given the growing health concerns and uncertainties associated with vaping, many people may be looking to give up e-cigarettes, too.

Vaping has become the preferred method of tobacco ingestion for young people, who may have added incentives to quit because their bodies and brains are still developing.

The 2022 National Youth Tobacco Survey revealed that 16.5% of high school students had used tobacco in the past 30 days, with one in four of those students using it daily.

People who want to quit vaping to protect their health or for other reasons have many alternative activities and treatments to help them.

At the root of all the alternatives mentioned here is a change in behavior: from vaping to not vaping. This is why therapies that focus on changing behavior can be so helpful.

This can be helpful for people with psychological disorders, too, because behaviors play a role in the development of these disorders.

Getting to the root of the behavior through the faulty or unhelpful thoughts and beliefs that accompany it can lead to lasting behavioral changes, which is key for quitting vaping.

Research into the efficacy of nicotine replacement therapy (NRT) for quitting vaping is limited, but there is some evidence that it can help and may be worth a try.

NRT tends to work best when paired with CBT or other therapies aimed at behavior modification.

NRT comes in the following forms:

Nicotine withdrawal symptoms might cause someone to keep using cigarettes or e-cigarettes, and NRT can help relieve those symptoms so that you can focus on the psychological aspects of quitting.

There is evidence that exercise can reduce the urge to smoke, especially short bursts of aerobic activity.

Exercise can also be a good replacement for vaping because it involves deep breathing and a change of scenery.

The exertion associated with aerobic exercise can also help strengthen both the heart and the lungs.

Some people have success using apps to help them quit vaping. These apps can help you track your use, identify triggers, and set and achieve vaping-reduction goals.

Puff Count is one popular app with a focus on vaping. Quit Genius focuses on the ideas used in CBT to help you quit.

Having access to more information about vaping and tools to stop using e-cigarettes can help people looking to quit reach their goal.

Here are some resources for getting started:

Yale University, Yale-Led Study Teaches Teens How to Quit Vaping: information on vaping as it pertains to teens, plus the opportunity to participate in a paid survey