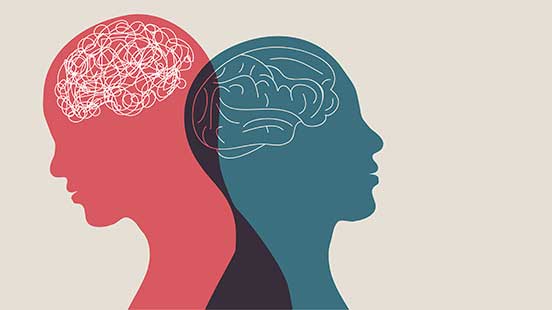 The co-occurrence of addiction and mental illness affects people of a broad spectrum of ages and backgrounds.

From substance abuse in LGBTQ communities to PTSD and addiction among military veterans, anyone may be affected by comorbid disorders.

Dually diagnosed mental health and substance use disorders are often correlated with each other, but they can also co-exist and have a completely independent relationship.

With co-occurring mental illnesses involving drug and alcohol use disorder, the symptoms of one disorder can feature more prominently than the secondary one, which may develop later on.

Mental health disorders can be contributing risk factors for substance use disorders and vice versa, and it is not always evident which disorders developed first and how they are correlated.

What Is A Dual Diagnosis?

A dual diagnosis refers to the co-occurrence or comorbidity of a mental health disorder and alcohol or drug addiction, which can produce a variety of symptoms.

Co-occurring disorders can be diagnosed simultaneously or one before the other, but the connection between them can be highly complex and challenging to treat concurrently.

Dual diagnosis treatment requires a holistic understanding of your history of symptoms and substance use to determine the appropriate evidence-based treatment approach.

Substance abuse is just as likely to be the cause or precursor of a mental disorder as it can be the subsequent result of attempts to self-medicate symptoms of a mental illness.

Depression is a mood disorder that affects many people on a wide scale of severity, with a variety of symptoms that can intensify the longer they persist untreated.

Symptoms of depression can include:

Self-medicating untreated symptoms with alcohol and drugs is a common strategy, but causes more damage by volatilizing brain chemicals and exacerbating symptoms.

As substance abuse escalates, the severity of depressive symptoms will also increase. This causes both disorders to converge and behaviors to feed into a self-destructive pattern of neglect and abuse.

Depressants such as alcohol, benzodiazepines, barbiturates, and opioids can have an especially adverse effect on symptoms, causing behaviors to be increasingly erratic.

Addiction can have a codependent relationship with anxiety as it can with depression. Anxiety disorders can cause severe symptoms that interfere with mental health and quality of life.

Generalized anxiety refers to the condition of chronic worrying when people become overwhelmed by their concerns over things they cannot control and fears of imminent disaster.

Other anxiety diagnoses such as paranoia, panic, and obsessive-compulsive disorder (OCD) are also highly comorbid with addiction, due to the chemical imbalances they cause in the brain.

Substance abuse in early adolescence is considered to be a major risk factor for anxiety in adulthood, although anxiety can also be one of the root causes and risk factors of addiction.

In either order, attempts to self-medicate symptoms of anxiety with substances invariably culminate in substance use disorders that result in severe addiction as the patterns persist.

Bipolar disorder is a serious mental illness that can severely impair social and cognitive skills and has the highest rate of comorbidities, including substance use disorder.

Other comorbid disorders that are common with bipolar include:

Comorbid bipolar disorder often interferes with personal and professional aspects of life as people struggle to attain and sustain emotional and mental balance.

Bipolar and substance use disorders share some key symptoms in common, in particular impulsivity, which makes both difficult to simultaneously treat due to high relapse rates.

Addiction and post-traumatic stress disorder (PTSD) go hand in hand among people who have experienced severe trauma and have difficulty coping with their debilitating symptoms.

PTSD can result in a myriad of co-occurring disorders, including:

Regarding the treatment of co-occurring PTSD and substance use disorder, the success rate of treatment outcomes is significantly lower for them than for those with isolated diagnoses.

Roughly half the population of those who need addiction treatment also meet the criteria of a PTSD diagnosis, which includes combat veterans and civilians of all ages.

Drug and alcohol abuse play a prevalent role as coping strategies to keep symptoms at bay in cases of undiagnosed and untreated PTSD, even though it inevitably amplifies the condition.

Schizophrenia is a severe psychiatric illness that affects roughly 1% of the global population, 47% of whom are impacted by drug or alcohol abuse, or a combination of addictions.

The most common substances of abuse in order of prevalence include:

Clinical studies suggest that the link between schizophrenia and substance use disorders is attributed to psychological and psychosocial impairments along with environmental stressors.

Schizophrenia distorts the perception of reality and severely impairs a person’s ability to function in all aspects of life, preventing people from pursuing employment opportunities and sustaining relationships.

People with schizophrenia live with symptoms such as:

Symptoms may be latent in early life and emerge or develop later on in adolescence or adulthood as the illness progresses. Recreational drug or alcohol use can activate symptoms.

People with undiagnosed schizophrenia may initially use alcohol or certain drugs to ameliorate their early symptoms, only to find that their symptoms progressively worsen with substance use.

Primary addiction hypothesis is an alternative theory with a more neurobiological approach to understanding the high comorbidity of schizophrenia and substance use disorder.

Also called “reward deficiency syndrome,” this theory suggests that addiction is a primary symptom of schizophrenia due to neuropathological reinforcement of drug-seeking behavior.

The co-occurrence of substance abuse and eating disorders results in many psychosocial consequences and requires more complex and integrated treatment approaches.

Eating disorders are characterized by distorted thoughts, dysfunctional behaviors, and obsessive patterns and rituals that focus on food, consumption, restriction, or body image.

One of the most common substance addictions co-occurring with eating disorders is cocaine, which is known for suppressing appetite.

Comorbidity of attention-deficit hyperactivity disorder (ADHD) and addiction is widely observed, with 25% of adults being treated for drug and alcohol abuse also affected by ADHD.

The behaviors and symptoms associated with ADHD are considered high risk factors for developing substance abuse, particularly impulsivity and OCD.

Stimulant medications prescribed to treat ADHD are also considered to have a high potential for abuse due to how they affect dopamine levels in the reward center of the brain.

People who are diagnosed with ADHD may abuse their ADHD medications to amplify the effects, which can increase their tolerance and lead them to abuse other stimulant drugs.

It is also common for people to self-medicate their ADHD symptoms with alcohol or depressant drugs that may initially counteract anxiety or hyperactivity but ultimately exacerbate symptoms.

According to data from the National Institute on Drug Abuse (NIDA), 7.7 million adults worldwide are affected by co-occurring mental health and substance use disorders.

Furthermore, roughly 38% of 20 million adults affected by addiction also have a mental health disorder, and 18% of 41 million adults with mental illness have a substance use disorder.

Barriers To Treatment For People With Co-Occurring Disorders

Although there are specialized treatments available, many people do not get the treatment they need, or they get treatment for one disorder but not the other.

Adults who need mental health treatment might be prevented from getting it due to the following barriers:

Adults who need addiction treatment might experience barriers such as:

The Relationship Between Mental Health And Addiction

There is a significant correlation between mental illness and addiction and various reasons why they co-occur so frequently. The most common reason is self-medication of symptoms.

Symptoms of mental health disorders tend to be compounded by the effects of alcohol and mind-altering drugs, even if the intention of use is to manage them and be able to function.

Once a substance use disorder develops, symptoms can become amplified and cause more dysfunctional thoughts and behaviors, which increases the propensity for addictive patterns.

Mental illness and addiction are mutual risk factors for each other, and one is as likely to precede and exacerbate the other. It is not always apparent which condition was pre-existing.

Mental health and substance use disorders are typically recognized and diagnosed when symptoms emerge and become evident.

A disorder can remain dormant before being activated or triggered by environmental factors, chemical reactions to substances, and changes in brain activity.

Risk factors for both mental health and substance use disorders include:

How Do I Know If I Have A Dual Diagnosis?

Co-occurring disorders involving mental health and substances should be diagnosed and treated by a mental healthcare professional or team of treatment providers.

Signs of co-occurring disorders and substance abuse problems can manifest in physical and mental symptoms that can develop gradually or rapidly, depending on the severity of the condition.

Some indicators of substance use and psychiatric disorders include:

Can I Self-Medicate A Dual Diagnosis?

If symptoms of a possible dual diagnosis emerge, you should defer to professional consultation and treatment. Self-diagnosis and self-medication are never effective approaches or resolutions.

Self-medicating symptoms typically results in adverse outcomes, whether in the short-term or long run. If you attempt to self-medicate a mental health disorder with substances, both disorders will worsen.

This is not to say that holistic approaches such as meditation, journaling, yoga, and exercise can’t help to alleviate some of the symptoms of mental health and substance use disorders.

These practices are healthy, and often a helpful part of the recovery process. But professional treatment is still needed to uncover the root causes of the disorders and develop a comprehensive recovery strategy.

Why Co-Occurring Disorders Are Treated Differently

Co-occurring disorders and dual diagnoses are highly complex and require individualized assessments to identify the core mental health issues and treat the symptoms.

Once a dual diagnosis is determined, treatment is often specific to the individual patient and their diagnosis. Flexibility in approach is optimal for successful treatment outcomes.

There are various approaches to treating co-occurring disorders simultaneously, which may be recommended based on individual medical needs and personal preferences.

Treatment programs have become increasingly diversified to offer cognitive behavioral therapies that focus on dual diagnosis treatment for alcohol and drug abuse along with mental illnesses.

Medication-assisted treatment (MAT) programs are proven to be highly effective for facilitating abstinence from substances throughout co-occurring mental health treatment.

This approach combines the use of medications with psychological counseling and behavioral therapies as part of an integrated treatment plan for mood disorders and psychiatric conditions.

Clinical studies have shown that patients with co-occurring disorders who are in MAT programs are more successful in recovery and experienced improvements in mental health conditions.

The benefits of MAT for people with dual diagnoses include:

Inpatient drug treatment is recommended as a higher level of intensive care for people with dual diagnoses who need specialized mental health and substance abuse treatment.

Dual diagnosis treatment programs in an inpatient addiction treatment setting can provide an integrated approach to treating patients with co-occurring substance use and mental health disorders.

Inpatient care may be a preferred alternative to intensive outpatient programs for people who need detox or do not have a safe environment that is conducive to sobriety.

In an inpatient treatment center, you can receive a variety of treatment services, including:

Explore these resources to get started:

Depression and Bipolar Support Alliance, Depression and Other Illnesses: Read educational resources on co-occurring depression and bipolar disorder and support for individuals, families, and friends.