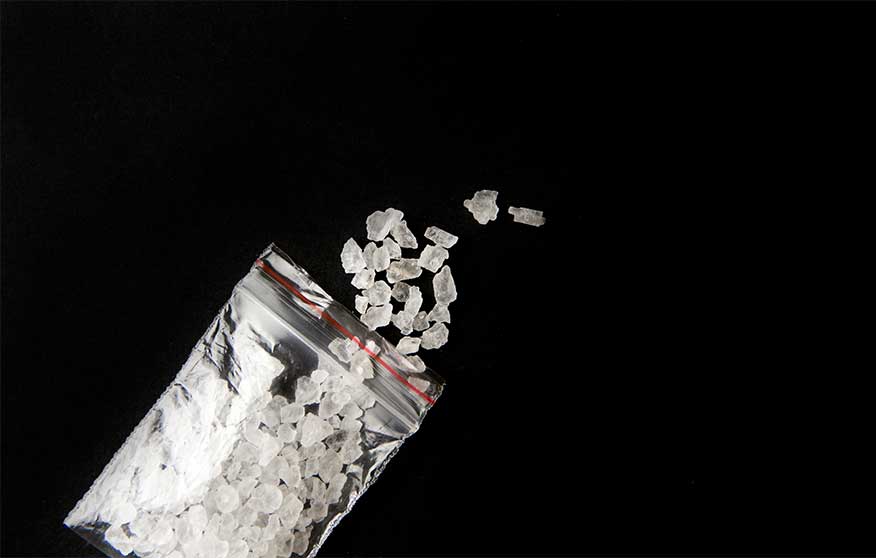 In recent years a new type of psychoactive stimulant with unpredictable and dangerous properties has appeared in US drug markets, presented both as a cheaper alternative to cocaine and as a counterfeit version of the drug.

What Is Fake Cocaine?

‘Fake cocaine’ and ‘fake crack’ are terms that have been used to describe a wide variety of substances passed off as cocaine, including household white powders and roadside pebbles.

Bath salts appeared in the United States around 2010 and typically contain the active ingredients methylenedioxypyrovalerone (MDPV), methylone, or mephedrone. These synthetic drugs closely resemble a natural cathinone found in the Ethiopian khat plant.

After being identified as analogues of khat, currently a Schedule I controlled substance with no accepted medical use, bath salt drugs were explicitly banned in the United States in 2012.

Nevertheless, they have become increasingly common over time, often being covertly imported as bath salts, plant food, or other innocuous products marked “not for human consumption.”

Depending on their purity, both forms of cocaine will have a bitter taste and will act as a local anesthetic, numbing the surface of the lips or tongue on contact.

However, street cocaine is generally cut with a wide variety of common and uncommon materials, which can influence the drug’s appearance and physical properties.

Bath salts, in contrast, tend to look like white, pink, or brown crystals or, if crushed, a white or brown powder or dust. They are also sometimes dyed a variety of other bright colors.

Bath salts may be packaged in small bags with misleading labels like Ivory Wave or Zoom, or simply placed in a clear plastic baggie.

The only truly reliable way to tell the difference between these drugs, or to ensure that bath salts or other drugs haven’t been laced into a sample of cocaine, MDMA, or some other street drug, is to have a sample tested in a laboratory.

But because professional testing isn’t a practical option for those struggling with chronic drug use or cocaine addiction, it’s important that those who use either substance participate in a professional substance abuse treatment program.

However, they also have a variety of important differences, including:

Bath salts are fully synthetic drugs that are made from scratch in illicit Asian laboratories. Cocaine, on the other hand, is a natural drug harvested from the leaves of coca plants in South America.

Bath salts are usually snorted, though they can also be smoked, swallowed, plugged or dissolved into water and injected.

Real cocaine, on the other hand, is usually taken by snorting, injection, or swallowing, and must be converted into crack cocaine before it can be smoked.

Bath salts tend to be cheaper than cocaine, especially high-quality or pure cocaine, which commands a premium price.

MDPV, the most common substance found in the urine of those hospitalized for using bath salts, is estimated to be more than ten times more potent than cocaine by weight.

When absorbed into your body, bath salts can cause a wide range of effects and side effects including:

Despite bath salts becoming known for causing bad trips and extended, sleepless periods of hallucinations, paranoia, panic, and delirium, bath salts are still addictive and dependence forming. And they can also cause long-term health effects including:

While the precise effects and risks of stimulant drugs like cocaine, methamphetamine, amphetamines, and bath salts can vary, all of these drugs are associated with severe physical and mental harm when abused.

Fortunately, services offered by Ohio Recovery Center can help, including: