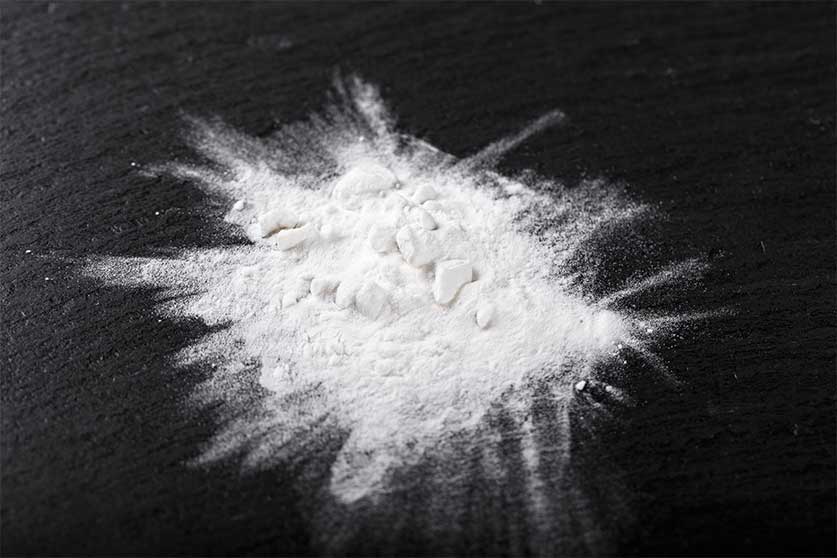 Cocaine is an illicit drug that’s derived from the coca plant and comes primarily from countries in South America.

What cocaine looks like can change depending on how pure the cocaine is, what type of cocaine it is, and what additives are mixed into it. That being said, it’s primarily some shade of white.

Knowing what the addictive drug looks like can help you stay away from it but it also helps you know if something is off with the cocaine being offered to you.

Powder cocaine is white, off-white, pinkish, or beige in color. And as the name suggests, it typically comes as a crystalline powder.

But the color can be different depending on what substances were cut into the stimulant drug. Cocaine is often mixed with cutting agents like talcum powder, sugar, ammonia, cornstarch, and laxatives, which can make the cocaine bright white.

It can also include additives like procaine, amphetamines, methamphetamines, laundry detergent, vitamins, caffeine, and opioids like fentanyl. With additives, the color can change from white to yellow or even brown.

Snorting is usually the way this form of cocaine is used, and the drug is also likely transported and sold in small plastic bags.

Crack cocaine looks like a small rock or chip and can be off-white or pink in color. It’s known by this name because of the sound it makes when it’s heated up and smoked.

It’s made by dissolving cocaine hydrochloride into baking soda and water and heating it until it becomes oily. Once that substance cools, it turns into the rock it’s known for.

Like powdered cocaine, crack cocaine is also often found in small baggies to make it easier to transport and sell.

The terms freebase cocaine and crack cocaine are used interchangeably and likely mean the same thing.

Side Effects Of Cocaine Use

Beyond knowing what cocaine looks like, it’s also important to know what effects the drug may bring on. The effects of using cocaine may include:

It’s also vital to know the signs of a cocaine overdose. If you or a loved one are experiencing any of these signs, call 911 immediately:

Many of the overdose deaths involving cocaine in Ohio in 2020 occurred because fentanyl was cut into the cocaine.

Treatment for cocaine abuse and addiction can differ depending on your specific situation and how severe your addiction is, but services are available on both an inpatient and outpatient basis.