Home › Alcohol Side Effects › What Is Alcoholic Nose?

The medical term is rhinophyma, and there is actually no known link between alcohol and rhinophyma. Though drinking alcohol may not be the cause of rhinophyma, those who suffer from rosacea and alcohol addiction may experience reddening of the skin and other symptoms. 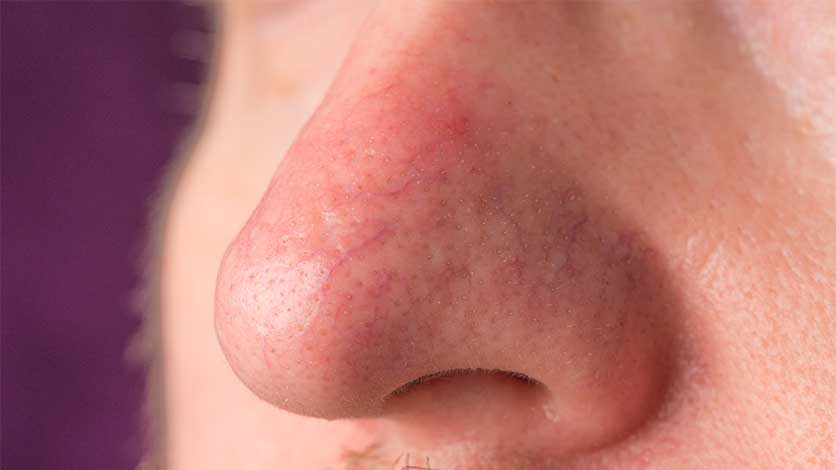 An alcoholic nose or a “whiskey nose” is a slang term used to describe a red nose or bumpy nose considered to be caused by excessive alcohol consumption.

The medical term for this condition is actually known as rhinophyma, and there is no known link between alcohol and rhinophyma.

Drinking alcohol may not be the cause of rhinophyma, but those who suffer from rosacea and alcohol addiction may experience reddening of the skin and other symptoms that can cause a flare-up.

Adding to this myth is the term “whiskey nose,” which comes from the way people would drink whiskey. Before drinking, people would sniff the whiskey to enjoy the aroma. In this way, whiskey sniffing added to the alcoholic nose myth.

In reality, an alcoholic nose is simply rhinophyma, a condition that mostly affects Caucasian men and those with fair skin. Rhinophyma is commonly associated with those who have a family history of rosacea, severe rosacea, or untreated cases of rosacea.

The condition often known as a drinker‘s nose is not caused by alcohol. It is a combination of those with a family history of rosacea and those who struggle with skin conditions or certain skin disorders.

Although there is no such thing as a drinker’s nose, drinking alcohol, particularly red wine, can lead to flushing of the face. Therefore, those with rosacea should avoid alcohol since this particular side effect may be exacerbated by alcohol abuse. Spicy foods have also been known to make rosacea symptoms worse.

Side Effects Of Alcohol Abuse

According to the National Institute on Alcohol Abuse and Alcoholism (NIAAA), drinking alcohol excessively, including the form of binge drinking, can also cause a number of other health problems such as certain diseases and cancers.

Side effects of alcohol abuse may include heavy sedation which can lead to accidents, drownings, or falls.

For those suffering from rosacea, it’s normal to feel self-conscious when experiencing pimples or redness of the nose. For many who have rosacea, oral antibiotics can be prescribed by your doctor.

In addition to this, there are other ways to help treat the redness and thickened skin of your nose. There are creams and various skincare products that can help with the appearance. Certain skincare products which are medically approved can help reduce redness caused by flare-ups.

If you or a loved one are seeking alcohol rehab at an addiction treatment center, it’s important to know the treatment options to consider.

To first treat your alcohol abuse, it’s important to undergo detox. The detoxification process only lasts short-term but may require that you are supervised by a healthcare professional.

Afterward, you may participate in inpatient programs, cognitive behavioral therapy, and other resources. You can find these alcohol use disorder treatment programs and more at Ohio Recovery Center. To learn more, please contact us today.