Street methamphetamine is commonly found in two forms: a white crystalline powder or transparent shards/crystals. However, it can also be pressed into tablets or capsules, converted to a freebase oil, or dissolved in liquid. 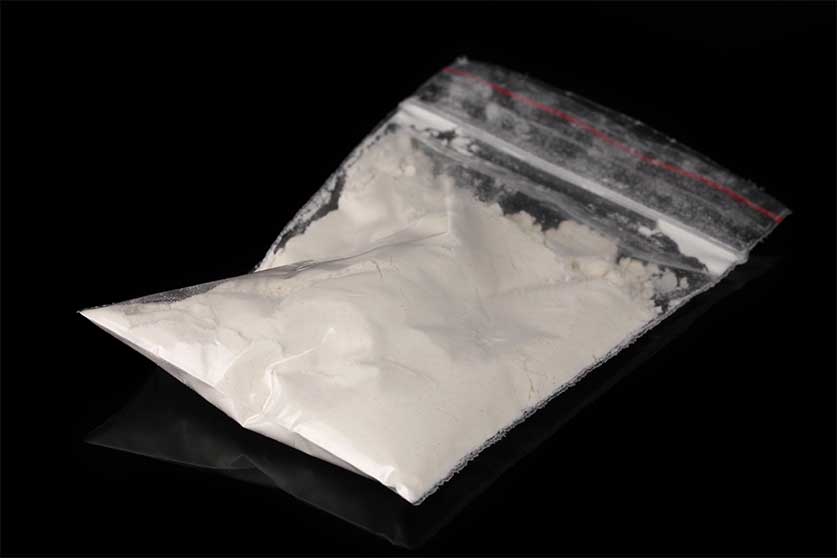 Methamphetamine, a powerful stimulant drug that also goes by street names like meth, speed, crank, ice, tina, and others, looks like:

In each case, methamphetamine remains an extremely addictive and highly dangerous drug with tremendously negative and lasting effects for a person’s physical, mental, and behavioral health.

Methamphetamine is produced in meth labs from pseudoephedrine and other precursor drugs through a process that produces batches of a fine white or off-white crystalline powder, which can be tinted various colors depending on its ingredients.

Known simply as meth, among other slang terms, this powder form of methamphetamine dissolves easily in water and can be taken through snorting, injection, or drinking.

It is also frequently adulterated with other inert powders and psychoactive drugs, including caffeine and the highly potent opioid fentanyl.

This alternative form of meth is made by dissolving methamphetamine powder in a solvent which is then allowed to evaporate. This leaves behind a substance that resembles translucent fragments of glass, quartz crystals, or rock salt.

Crystal methamphetamine, also known as ice or tina, is usually smoked though it can also be dissolved and injected. It’s known for promoting a more intense high than powdered meth due to its increased concentration.

Street meth is sometimes taken in a pill form known as yaba.

This primarily Asian drug usually contains a mixture of caffeine and relatively low dose of methamphetamine stamped with letters, images, or logos similar to MDMA/ecstasy, another club drug that often sometimes contains methamphetamine as an adulterant.

Meth pills are most often swallowed though they can be tampered with and taken in other ways.

Street meth is most commonly produced in illicit Mexican drug labs. However, there is also a pharmaceutical version of methamphetamine occasionally prescribed in low, controlled doses by physicians to manage treatment-resistant ADHD (attention deficit hyperactivity disorder) and narcolepsy.

These tablets, which have the brand name Desoxyn, are round, white, and imprinted with a stylized ‘a’ and/or other identifiers.

Rarely, methamphetamine is modified into a free base form that resembles an oily liquid or solid material with a yellow or brown color.

This highly concentrated drug, known as base, does not dissolve in water and is taken by smoking.

A large portion of the methamphetamine that enters the United States is hidden inside other liquid, including cooking oil, alcohol, gasoline, and water.

The vast majority of this meth is extracted from the liquid in various ways and reconstituted into a solid form of meth, but sometimes bitter-tasting liquid meth is taken as-is through swallowing.

If you or a loved one require drug addiction treatment services for meth abuse, contact Ohio Recovery Center to learn how we address this substance use disorder.