Crystal meth is an addictive stimulant drug that produces an extended, euphoric, and energetic high followed by a severe comedown and crash. Long-term, meth use will likely degrade the body and mind in damaging ways. 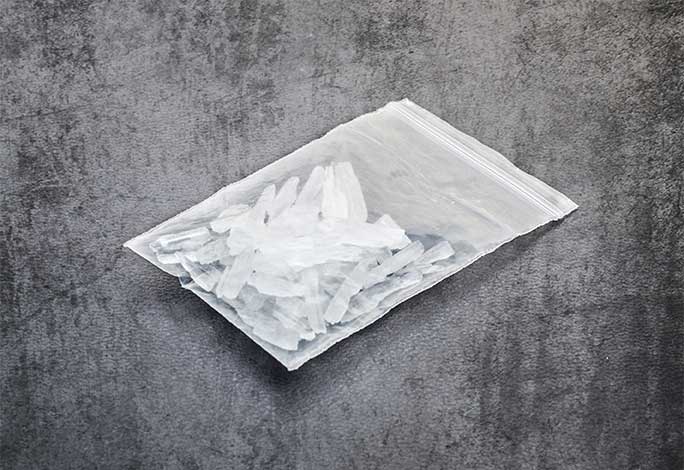 Crystal methamphetamine is a powerful and long-acting synthetic stimulant drug known for causing severe drug addiction and extreme physical and mental harm in those who abuse it.

Methamphetamine is a derivative of amphetamine, a stimulant drug used to treat medical conditions including ADHD (attention-deficit hyperactivity disorder) and narcolepsy.

As a Schedule II controlled substance, methamphetamine can also be legally prescribed for these uses in uncommon instances. But pharmaceutical methamphetamine is rare and tightly controlled, while crystal meth is cooked in highly toxic, secretive drug labs either in the United States or foreign countries.

When used, crystal meth floods the brain with dopamine, a neurotransmitter responsible for pleasure and reward. This also sends the body and mind racing in a euphoric rush and long-lasting high, followed by an equally severe comedown or crash afterwards.

Short-Term Signs Of Crystal Meth Use

The immediate effects of meth on the central nervous system will likely impact how a person thinks and behaves in noticeable and often bizarre ways. Common signs of methamphetamine drug use include:

These effects usually last between 6 to 12 hours for a single dose, with swallowing or snorting having a slower onset and smoking and injection having a much faster onset of effect.

As the drug wears off, a methamphetamine high likely gives way to a comedown and symptoms that can include confusion, pain, fatigue, apathy, heartburn, nausea, anxiety, and depression.

To temporarily avoid these feelings, many people continue their methamphetamine abuse in repeated cycles that can last for days at a time, known as a binge.

However, with each cycle the pleasurable effects of crystal meth use diminish, and the body grows more exhausted, hungry, dehydrated, and weak until a person reaches a stage known as a crash or tweaking.

Tweaking can be identified by:

Street names for crystal meth generally reference either the appearance or effects of meth, and include Tina, speed, zoom, go, crank, tweak, ice, glass, and others.

In cases of a meth overdose, the effects of methamphetamine can overwhelm the body’s normal, life-sustaining functions. This can suddenly trigger a variety of serious or life-threatening side effects including:

Many fatal methamphetamine overdoses also occur due to the combination use of methamphetamine with opioid drugs like heroin or fentanyl. However, the push/pull effects of these opposing, highly addictive drugs can be exceedingly toxic and unpredictable.

This may change the signs and symptoms of an overdose considerably.

The long-term effects of chronic methamphetamine addiction often include:

Even developing 2-3 of the following criteria, described in the DSM-5, can indicate the development of a diagnosable substance use disorder, more commonly known as addiction:

Substance use disorders, including methamphetamine addiction, are treatable behavioral disorders. But the process of recovery can be a long and difficult one, and relapses are common.

If you or a loved one struggles with methamphetamine use, consider a personalized substance abuse treatment program hosted by Ohio Recovery Center.

For more information, please reach out to our professional staff today.