Home › What Does One Milligram Of Powder Substance Look Like?

What Does One Milligram Of Powder Substance Look Like? 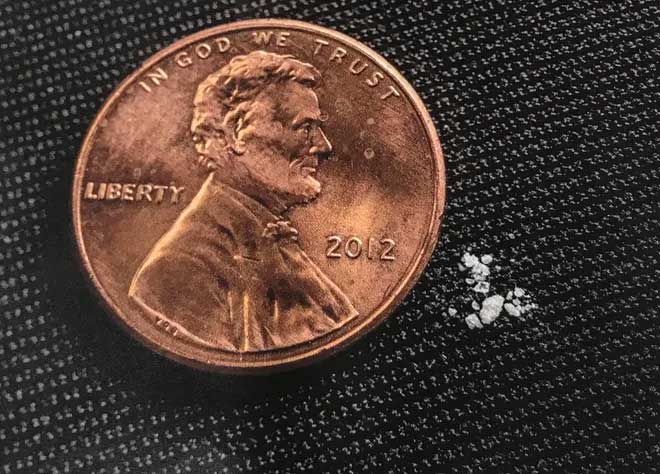 Illicit drugs come in many dosage forms, including powders. Some of the most popular powder substances include cocaine, fentanyl, heroin, methamphetamine, and MDMA. These controlled substances are available in various doses, including one milligram.

What Does One Milligram Of Powder Substance Look Like?

One milligram of powder substance typically resembles a grain of sand. To determine if it’s exactly one milligram, you would need to use a milligram scale.

The color of the grain-sized powder will depend on the drug.

Cocaine is a stimulant drug made from the leaves of the coca plant. The powder form of cocaine, cocaine hydrochloride, is made with coca paste and sodium chloride (salt).

Cocaine powder generally ranges from white to off-white. However, much of the cocaine sold in Ohio contains additives that affect the color. In particular, additives like caffeine and procaine can turn the drug beige.

Fentanyl is a synthetic opioid analgesic (painkiller) that was developed as an intravenous anesthetic.

While pure fentanyl powder is white, additives can turn it beige or brown. Also, according to the Drug Enforcement Administration (DEA), some drug dealers have recently started selling “rainbow fentanyl,” which comes in various bright colors.

Heroin is a semi-synthetic opioid made from a natural opioid called morphine sulfate. The powder form ranges from white to brown. As with cocaine and fentanyl, additives make heroin darker.

Methamphetamine (or “meth”) is a stimulant drug made from a variety of ingredients, including dangerous chemicals (such as anhydrous ammonia) and over-the-counter medications and supplements (such as pseudoephedrine).

The powder form of meth ranges from white to off-white. However, certain meth ingredients can change the drug’s color in some cases. For example, solvents like camping stove fuel may turn the powder blue, while red pseudoephedrine may turn it pink or red.

MDMA is a synthetic drug that acts as both a stimulant and a psychedelic. The powder formulation of MDMA is often called “molly.” It typically ranges from white to yellow.

According to the National Institute on Drug Abuse, cocaine poses many short-term health risks, including:

In addition, regular cocaine use can lead to addiction, heart attack, and stroke.

Even two milligrams (the size of about two grains of sand) can cause a life-threatening opioid overdose.

Other possible side effects of fentanyl include drowsiness, nausea, and urinary retention. The drug is also highly addictive.

The most common side effects of heroin include:

People who use methamphetamine face a variety of short-term health risks, including:

Meth can also cause psychotic symptoms, such as paranoia, hallucinations, and delusions.

Regular MDMA use can cause issues like depression, trouble concentrating, and heart disease.

Also, while researchers haven’t determined if MDMA is addictive, it can cause symptoms of addiction, including:

To learn more about addiction treatment options, please reach out to Ohio Recovery Center. Our substance abuse treatment programs offer personalized, evidence-based care to help you or your loved one stay sober.